Hour of Code 2016 With Asociatia Techsoup And Microsoft Romania

Over 700 secondary school students from 8 cities in Romania have attended Hour of Code “Minecraft” events organized by Asociatia Techsoup and Microsoft. The goal was to encourage youth with computer programming and foster a passion for coding.

Students from 8 cities in Romania learned to code their first computer program with the help of the Minecraft tutorial under the guidance of computer science teachers, the technical Evangelism team and the DX Team Microsoft from Romania. 2016 is the third consecutive year in which Asociatia Techsoup has organized in partnership with Microsoft events in the Computer Science Week Global Campaign. During these 3 years, they have reached an astonishing number of over 1.700 secondary school students from Romania.

In the first week of December 2016, students learned how to program using the Minecraft tutorial during classes and special events in which high school students were mentors for middle school students. The events were created by the teachers taking part of the program Teaching <the> Future (Predau Viitor), a ground-breaking STEM education program for CS teaching which is being developed by Asociatia Techoup.

The week kicked off with an event in Bucharest at the Microsoft headquarters in which over 70 secondary students completed the Minecraft – Designer Hour of Code tutorial with the guidance of Radu Matei – a DX Microsoft Team member and a volunteer in Opening Opportunities – the nationally awarded computer science mentorship driven program for high-school students in Romania developed by Asociatia Techsoup in partnership also with Microsoft.

Special guests at the event in Bucharest were ENTy – the Romanian winning start-up team of this year’s global Imagine Cup competition organized by Microsoft. The two team members spoke of their experience and technical path alongside ENTy, a path at the end of which they won the big prize consisting of 50,000 USD and a mentoring session from Satya Nadella, Microsoft’s CEO. 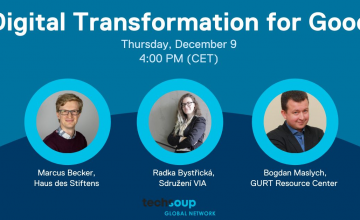 Join TechSoup Global Network virtual meeting on December 9th at 4.00 PM CET for conversations with civil society leaders from Haus des Stiftens gGmbH, GURT Resource Centre and Sdružení VIA, on the opportunities, challenges, and realities faced on the ground as they work to accomplish the Sustainable Development Goals. Premiere in a series of insights […]

June 15, 2020, eleven TechSoup partners, participants of #DLNGO 2.0 project, were working virtually on nonprofits’ digital transformation impact stories. Within last weeks all partners conducted interviews with nonprofits to explore:  Why they decided to digitally transform? How this process looked like? What are the benefits from digital transformation?  What are the lessons learned? We will […] 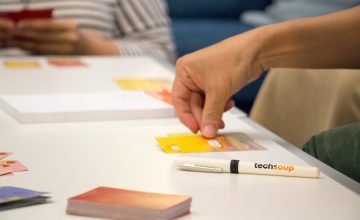 “Learning about disinformation is the first way to counter it”

In June 2021, TechSoup partners from 4 countries: Hungary, Romania, Bulgaria and Poland took part in 3 days online trainings developing knowledge on how disinformation is affecting civil society and what are the ways to combat shrinking civil space. “Combating Shrinking Civil Space” was another workshop of the DTS4SS project – Digital and Training Skills […]